Even When It is Cooler, It is Still the Desert

I was in Arizona and California in February, attending alumni and donor events as well as visiting with friends of our college. The flight from Omaha to Phoenix is best described

by the word turbulence. As we approached Albuquerque, the pilot climbed to 48,000 feet, and told us about a mountain wave whose effect we were trying to avoid. We climbed and descended and climbed again, and overall the pilot saved us from what had been a real scrambling for other flights over the same route that day. It was good to get back on the ground.

The Phoenix area is full of towns and cities that are now the home of sports teams, businesses, and other things that some might say should be in Phoenix. On the first night in Arizona, we had dinner with a former Omaha colleague in Glendale, home of the Cardinals and Coyotes. Glendale is adjacent to Surprise, the baseball spring training site for the Rangers and Royals. Then it’s just up (or down) the road to the Peoria Sports Complex, the spring training location for the Mariners and Padres. On the second evening, we traveled all the way to the other side of Phoenix to Chandler where the UNO alumni association reception was held. Now you get the picture. There is a lot of driving along with a good deal of traffic, typical of each time we visit the Phoenix area.

The stark features of the desert are beautiful. Sand, rock, and scrub vegetation form fascinating views as the foreground creates a start contrast to the bluest of skies. The artificial green of golf courses and perfectly manicured lawns seem out of place in a land where some terrain is referred to as moonscape. At the same time, much of the residential and commercial real estate architecture appears to be a nearly ideal fit for a place that has little natural water and lots of sand with varying colors. 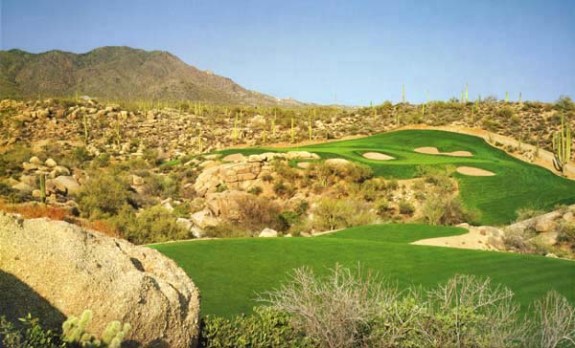 The drive from Phoenix (we were actually in Scottsdale) to Palm Springs on Interstate 10 provides an even better sense for the barren nature of the land out there. Spain and Mexico fought hard to keep Texas, but I am not so sure that they felt as strongly about the desert (Arizona). In 1836, Mexico threatened war if the U.S. attempted to annex Texas, and President Martin Van Buren backed off. Ten years later, the U.S. declared war on Mexico. In 1848 the Treaty of Guadalupe-Hidalgo was signed. President James K. Polk and the United States Senate agreed to pay $15 million for 525,000 square miles of land. The U.S.

government also agreed to assume $3.25 million in debt owed by Mexico to U.S. citizens. The U.S. bought the last section of the continental United States in the Gadsden Purchase in 1854. That small chunk of land, which now makes up the southwest corner of New Mexico and the area south of Phoenix to the Mexican border in Arizona, cost us a $10 million for nearly 30,000 square miles, much more on a cost per square mile basis than the purchase of Texas.

Palm Springs lies in the desert as well, but is greener than Phoenix, not because of more precipitation but because a lot of water is used to keep it green. The browns and grays of the desert provide a color contrast that makes the grass, flowers, and other foliage even more colorful no matter what season or time of the day. New residential and commercial developments pop up everywhere, with acres of sand transformed into houses, apartments, commercial buildings, parks, public developments, strip malls, yards and parking lots. At the edge of town, Palm Springs, Desert Hot Springs, Cathedral City, or any of the towns/cities that have “popped up”, some land has been converted into wind farms with giant turbines dominating the landscape. Palm Springs and the surrounding areas enjoy a good deal of sustained wind, and the wind farms take great advantage of the natural conditions that exist. Further away, solar farms rely on 270-350 days of sunlight. Overall the southeast-most part of California has become a significant contributor to the non-carbon based energy supply.

The remainder of the trip sent us further west to Redlands, Santa Barbara, Los Alamitos, a suburb of Long Beach, and Irvine. We met with alumni/friends in each of these places, getting updates on their lives and sharing stories about our college. My favorite signage observed on this segment of the trip appeared on a late model, white van and read, “Lipstick Bail Bonds-Kiss Jail Goodbye”. Of course, there was an image of very red lips next to the slogan. While I do not anticipate the need to “bond out” anytime soon and I do not live in Los Alamitos, I will never forget the phrase/image. After a week of air and automobile travel, it was time to fly home. Once again, that huge John Wayne statue at the Orange County airport greeted us as we made our way to our gate and our ride home. We covered 2,970 miles.