Pigs, Paella, and Riders on the Storm

I was in Houston June 19 and 20 for the Gulf Coast Green Symposium and Exposition. The meeting has been held annually for the last nine years and is organized by the Houston American Institute of Architects (AIA) group and features sustainability as its focus. My colleague, Rick Yoder, and I were there to talk about the LEEDing of Mammel Hall with a particular emphasis on our “trip to the cloud” use of information technology at the desktop, in the classroom, in laboratories, and for freestanding signage and way-finding. I like being around architects, listening to stories about the latest designs and breakthroughs with respect to LEED certification and architecture related to sustainability. Daniel Orr spoke about the Oberlin Project (Oberlin, Ohio) and we visited the Monarch School, complete with its 1,120 square-foot studio classroom that has been built to meet the Living Building Challenge standard. Overall, it was a well-spent 1.5 days.

The most memorable elements of this trip have to do with the title of this blog. On Thursday night we wandered out of the hotel Magnolia in downtown Houston to find a place to eat. We found the Batanga, a Tapas restaurant that features whole roasted pigs and paella. The food was fine, but the music, a Flamenco-style five- piece band with an excellent singer, was the real highlight. The room moved when they played, even if you were not out on the dance floor, and there was plenty of laughter and grinding going on at the bar.

The highlight of the trip was the ride (or should I note rides) on the way home. Houston-Bush to Omaha-Eppley is a roughly two hour flight under normal conditions. We boarded our ride at 6:30 pm for a 6:55 pm departure. We were wheels-up at approximately 7:10 pm, and it looked like we would be home on schedule. The ride was smooth and Rick and I talked about the next steps for sustainability in our college and beyond. However, about 20 minutes short of Omaha the co-pilot came on the speaker to announce there was rough weather in Omaha and that we might have to land at another airport. He also noted that we had enough fuel to circle for 30 minutes at which time a final destication decision would be made. We could easily see that the friendly skies had become unfriendly. Thirty minutes later we were on our way to Lincoln, Nebraska to pick up more gas and wait for the storm to clear. (I should note here that many areas in and around Omaha had five or more inches of rain June 20.) 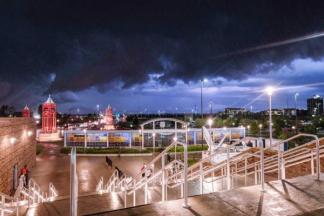 While on the ground in Lincoln, I began to wonder about songs related to rain and rainstorms and of course with the help of technology I began to poke around for information. First I located a YouTube version of the Doors Riders on the Storm and I played it. Well, further research uncovered that there are about 775 songs with rain/rain and storm theme, including some very good tunes and a few that should never have been written and sung. There are country and western rain songs (a top ten list is offered) as well as a short list of the worst (e.g. “It’s Raining Men” by the Weather Girls). On the good side think:

Singin’ in the Rain – Gene Kelley

Can you think of ten more?

Our plane never left the Lincoln airport. Well after midnight the pilots announced it was a no go (I think they timed out). In addition, the Lincoln airport office announced that there were no hotel rooms and no rental cars available (think sleeping on the floor at the airport). The flight was rescheduled to leave for Omaha at 11:00 am Saturday. Not good. So, we took a taxi to Omaha. I got home at 2:45 am tired, but happy not to be trying to sleep in the very small carpeted area in the Lincoln, NE airport.